Traditional or Tankless: Which Water Heater Is Best? 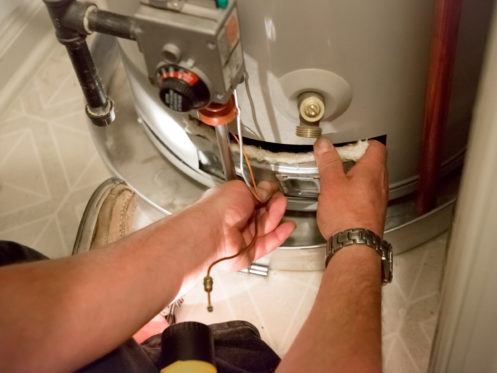 If you’re looking to replace your old water heater, you may be wondering whether it is better to go with a traditional unit or a tankless heater. Both types of water heaters can be a good choice depending on your specific wants and how much hot water your home uses on a daily basis. Nowadays, most homeowners seem to prefer tankless units primarily due to their far greater energy efficiency. That being said, traditional water heaters do have their own advantages, with the main one being that it takes far less time for hot water to flow from the tap. With these issues in mind, let’s take a closer look at each type to help make it easier for you to decide which option is best for your home.

Compared to a traditional water heater that stores a large volume of hot water inside its tank, a tankless unit is a so-called “on-demand” heater. As soon as you turn on the hot water tap, the unit almost instantly heats the water using a heat exchanger. The exchanger is heated up to an extremely high temperature using either gas or electricity, and this heat is then instantly transferred to the water as it flows through the unit. With a gas unit, propane or natural gas is burned to quickly heat the exchanger, whereas an electric unit uses electricity to heat a series of metal coils.

Generally speaking, electric tankless units are considered “point-of-use” heaters, which means that they provide hot water to only one source such as a sink or shower. These units are generally located within a few feet of the water source, and this has the advantage of drastically shortening the lag time or the time it takes for hot water to begin flowing from the tap. In most cases, an electric unit should be able to almost instantly supply hot water in an even shorter time than a traditional water heater could.

Gas tankless units, on the other hand, are usually whole-home water heaters. Gas units are generally cheaper to run and have a longer lifespan than electric units, but they also tend to have a much longer lag time. Depending on how far away from the heater the water source is and the temperature of the water flo
wing into the unit, it could take anywhere from a few seconds to more than a minute before hot water finally starts flowing from the tap.

Gas units are generally capable of meeting the entire building’s hot water needs. However, this depends in large part on the unit’s flow rate, which is how much hot water it can produce per minute. The flow rate determines how much hot water you can use at one time. Most gas tankless units are easily capable of providing enough hot water for two people to shower at the same time. Nevertheless, you will likely need a unit with a higher flow rate if you plan on using a large volume of hot water at one time, such as taking a shower and doing the laundry or running the dishwasher at the same time.

Comparing the Energy Efficiency of Traditional and Tankless Units

All of the above factors are definitely important, but the biggest reason most people opt for a tankless unit is that they use much less energy. The biggest issue with traditional water heaters is that they are constantly using energy to keep the water inside the tank hot no matter whether you’re using the hot water or not.

The EPA estimates that switching from a traditional to a tankless water heater should reduce your energy costs by around 22%. However, the actual savings depends in large part on how much hot water your home uses in a day. Your total savings will generally be quite a bit less than this if you use a large volume of hot water every day, whereas your savings could be far greater if your home uses 40 gallons or less of hot water in a day. In this situation, the EPA estimates that you could save as much as 40%.

On the other hand, your savings could be as little as 10% if you use more than 80 gallons a day. This means that if you use a large volume of hot water every day, the energy savings you get from the tankless unit will probably never offset the additional cost compared to going with a traditional unit. This is especially true if you’re considering switching from a traditional to a tankless heater since this will require additional expenses for retrofitting your plumbing to accept the tankless unit.

Tankless water heaters also take up far less space, and they don’t suffer from the same issues with leaks as traditional heaters do. As traditional heaters get older, they become more prone to leaking. They can also suffer a catastrophic failure that causes the entire volume of water inside the tank to suddenly come flooding out. Tankless water heaters can still leak, but the leaks are much more minor since the unit doesn’t store any water.

A tankless unit also ensures that you will never run out of hot water as long as your electricity or gas is still working although how much hot water you can use at one time will still be limited by the flow rate. With a traditional heater, you can easily run out of hot water if you use too much in a short period of time. When this happens, it can take anywhere from 20 minutes to several hours for the unit to fully reheat the water in the tank.

Ultimately, choosing between a traditional or tankless unit depends on what your main priorities are and how much you’re willing to spend. Both types of heaters do have their own advantages and drawbacks, which is why it is important to carefully consider all of the above factors when making your decision.

If you’re looking to replace your water heater, the experts at Meade’s Heating and Air in Sterling are ready to help. We install, service and repair both traditional and tankless units, and we carry a wide selection of models suitable for homes of any size. We also offer a full range of cooling and heating services as well as air quality testing and gas line services. Give us a call today to learn more about your options for a new water heater or to schedule an appointment for any of our services.